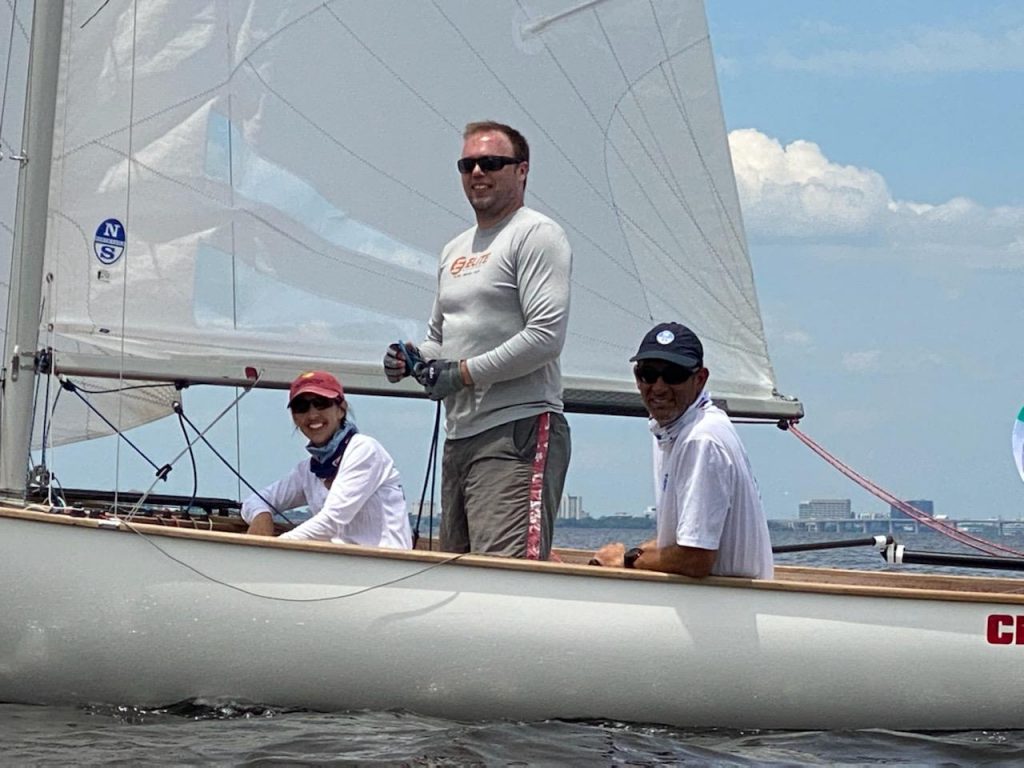 For Sarah Bonner, Aaron Holland and Peter Hudson on 3321 Kelpy II, it could be any song from any genre. “If we’re not singing, something’s not right,” says Sara.

For Joy Martin, John Baker and Casey Ellie on 4024 Ellie, the song could be the Navy Jet Vortex Blues. A third of the way up the first beat (“after we crossed Ingham and Dellenbaugh,” says Joy) they were hit by a vortex from a Jet landing at Naval Air Station Jacksonville. Fully hiked out, they capsized to weather and immediately righted only to get blasted again and capsize again. The fleet long gone, they sailed in.

For race seven winners Steve Gruver, Kristen Barnard and Jay Lurie on 4004 Rocket, it was lines from Kenny Rogers’ The Gambler. They started at the boat, tacked immediately, went all the way right and, in a regatta where all week boats tumbled from early race leads (including their team in two other races), they led all the way to the finish by staying calm.

The line? “You never count your money when you’re sittin’ at the table. There’ll be time enough for countin’ when the dealin’s done.”

On jack Finefrock’s 3945 Bananawind, middle crew and son Kyle suggested a Toby Keith line after they followed their stellar second and fifth on Wednesday with finishes in the twenties and thirties in the last three races. “I ain’t as good as I once was, but I’m as good once ss I ever was.” Here’s to more, as the last time Jack missed sailing Thistle Nationals was 1980. Forward crew was Callie Ruppen, who might not know who Toby Keith is!

Jacksonville served up another hot day and sunny with wind different than predicted. All the forecasts were unstable conditions before noon and then building during the afternoon. The race committee postponed an hour from 11 to noon to keep teams out of the heat and sun.

What happened? Those getting to the start area at 11 found the strongest wind of the day at 12-plus knots. It tapered from there, but remained strong and consistent  enough for PRO Mark Foster and his team to again get a race completed in their targeted 75-minute range.

With everyone in and mostly derigged by 4 pm, the club pool again filled with Thistle sailors and their families.

Kristen Barnard summed up the feeling of many here: “ We love our Thistle family.”