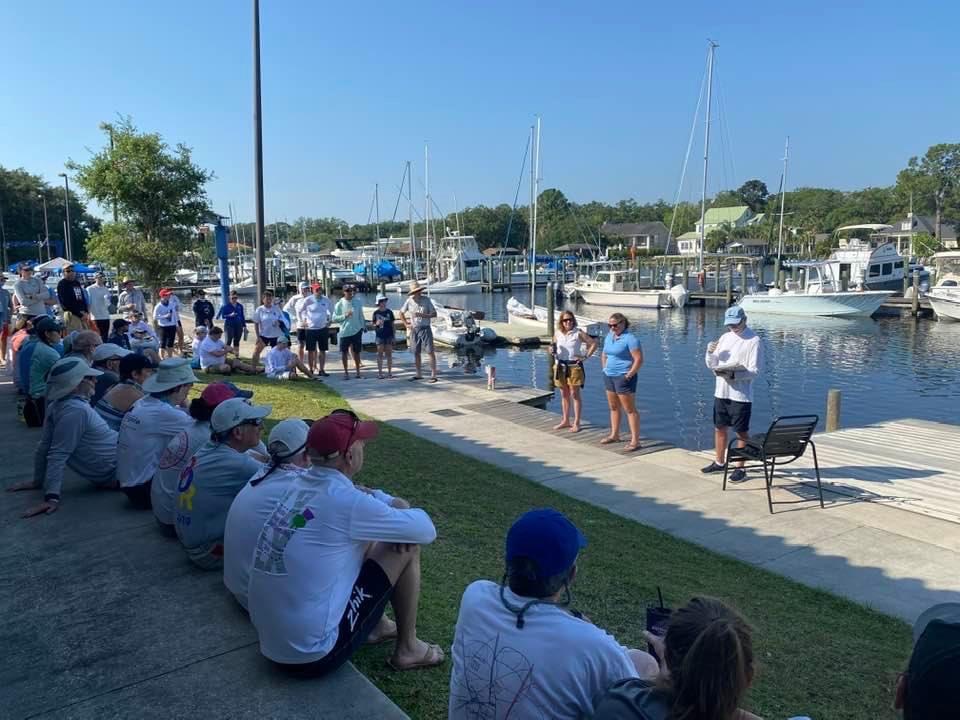 Today began with a fleet briefing by the PRO at 9:30 followed by what we expected to be a 11:00 first warning.  Truth be told we were warned that might be postponed…

Well 11:00 arrived but the wind was a no show!  The Race Committee instructed us to return to the Club for an onshore postponement which would be reevaluated at 2:30 as I recall

Most of us chose to cool off in the pool and enjoyed lunch from the snackbar.  A 4-square court was constructed with donations of duct tape and there was at least one swimming race

As the day progressed the Race Committee communicated the status of postponement and their expectations.  Ultimately they made the change from on-shore postponement to flying the AP from their signal boat to expedite the schedule should conditions change.

Unfortunately the conditions didn’t change and the difficult call was made to hold off until tomorrow when we will try again for more races.  As luck would have it shortly after calling the day a gentle breeze filled in.

We all enjoyed a little more pool time then dove head first into a delicious taco dinner.

Looking forward to a fun day of sailboat racing tomorrow

Today started with fog and dew, but sadly no wind. At the 9:30 am skippers briefing, the PRO shared that we were AP on shore with the first gun no earlier than 3:30pm. The annual meeting was at 10am, run by Nicole Shedden, who I hear did a phenomenal job. Lots of folks went swimming, and relaxed at the club to pass the time. A winners round table was held at 1:15 pm moderated by Skip Dieball with Dave Dellenbaugh, Dan Hesse, Paul Abdullah, Mark Gise, Mike Ingham, and Greg Griffin. They shared their tips and tricks on starts, upwind and downwind tactics, mark rounding, and the importance of watching shifts and keeping track of the currents.

The first race of the day was planned to start at 3:30, and so the fleet gathered near the committee boat by around 3:15. At 3:20, there was a large shift left so RC postponed the race to adjust the course. Our first race started at around 4pm. The first race was a Course 5, (windward leeward 2x) and the left was favored as there was more breeze. The current was mostly slack. Wind speed approximately 6-8 and built to 9-12 by the end of the race.

The second race of the day started at around 5:30pm. The wind was 9-12 knots and the start was again clean with no general recalls and the RC planned a course #4, windward leeward triangle course. By the 2nd upwind leg, the right was favored to avoid the current ripping down the river.

As we finished and were putting the boats away, we had a gorgeous sunset and cold beer. Everyone was tired from two breezy races, and as the boats were put away, I heard a variety of dinner and post-sailing beverages plans made by lots of sailors. –Sara Paisner