The Auspicious Start of the Thistle Class Association 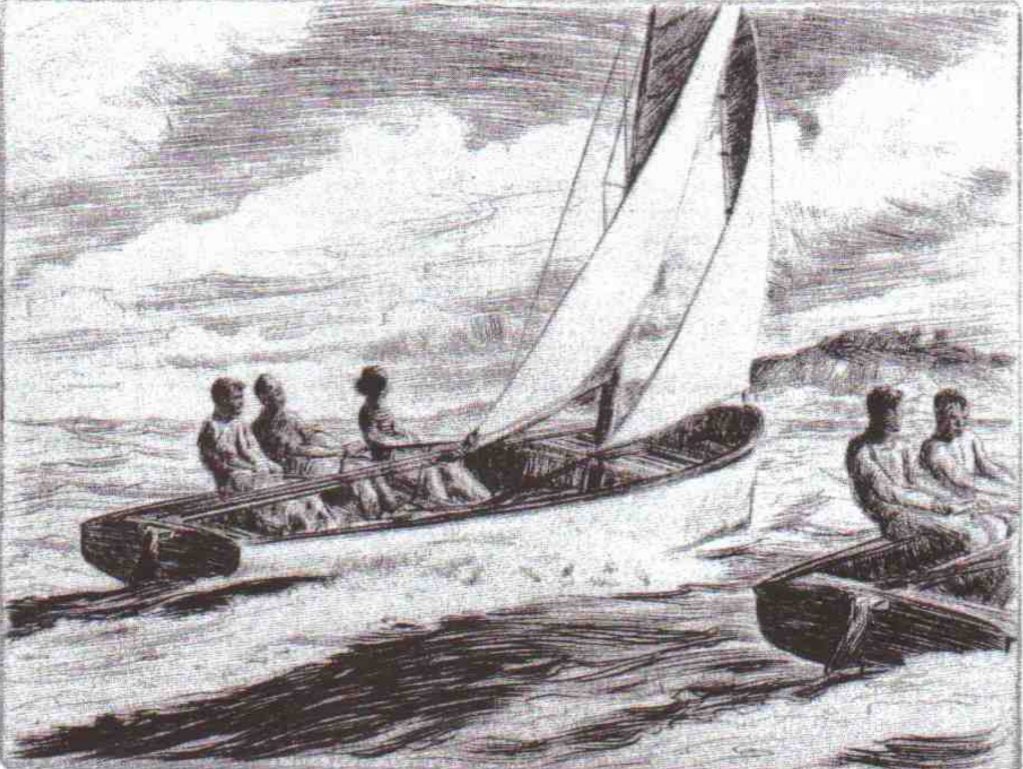 Written By Sandy Douglass, designer of the Thistle
Published in Rudder Magazine in the 1950s

The Start of the Thistle Class Association Was Auspicious Although Unusual

In the autumn of 1945, as soon as it was evident that the war would end, the prospective Thistle owners, those who had placed orders for boats to be built on an “if and when” basis, met and formed the Thistle Class Association, complete with constitution, by-laws and officers, several months before the first boats were built. The class was so well organized that in 1946, at the end of the first sailing season, the first national championship races were held, the site being Maumee Bay at Toledo, Ohio.

What had caused this great interest in a boat which was almost unknown?

It has been said many times, and with reason, that it was the Thistle’s first race that, because of it’s unusual nature, made the Thistle Class. Because the race told such an eloquent story of the nature of the Thistle a brief account of it here will serve to give a better understanding of the boat.

I had completed the Thistle prototype early in the summer of 1945 and for her first real test took her to Put-in-Bay for the annual regatta of the Inter-Lake Yachting Association. She was a double planked boat with very light framing, as close an approximation as possible of what a molded boat would be. She obviously was fast, and an open boat. The “experts” sadly shook their heads as they muttered that she was no boat for Lake Erie’s nasty seas. If the weather had remained fair and mild it is possible that the Thistle might have remained unsung.

Fate was kind to the Thistle in providing an exceedingly boisterous northwester with seas which appeared to be at least twelve feet high but probably were not over six or eight.

Being the only one of her kind, the Thistle had to race in the Universal class, a catch-all for the bigger boats that did not fit into any of the various racing classes, with handicaps based on the Universal Rule. There we were, faced with the prospect of sailing the big boat course, a fifteen mile triangle out on open Lake Erie, in winds estimated to be forty miles an hour and higher in the gusts. My wife Mary was my jib tender and our crew was enjoying his first sailboat ride. 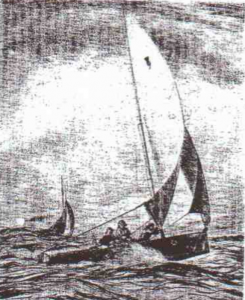 Our competition consisted of a fair number of keel boats, the largest a big schooner, and of which the best performer proved to be a 22 Square Meter. The 22s, coming from the leeward side of the Atlantic, are designed for and at their best in strong winds. The little Thistle, less than half the length of the other boats, was given time by all of them. Under such circumstances my hope was that we might complete the course creditably and perhaps save our time if all went well. I myself did not know what she could do.

We were given a windward start. Out of the corner of my eye I noticed that a few of the other boats were so smothered by the wind that they were unable to get across the line on the first try. I was astounded to find that we not only were holding our own, but soon were leading the fleet, footing as fast as the 22 and making good a full point higher. Just about every boat on the course was taking green seas aboard, plunging under solid water. The crews of some of the larger racing boats even formed bucket lines to stay afloat. We never once took solid water aboard and with a small tomato can my wife occasionally dipped out what little spray blew into the boat.

Soon we caught up to the stragglers of the class ahead of us.

By the time we reached the weather mark the sail of the 22 was only a white dot in the distance behind us. Then came a wild planing leg and a broad reach home in a lightening wind. The race committee was astounded to see us coming sailing in, almost completely dry, more than twenty minutes. ahead of the second boat and some forty minutes ahead of the stragglers of the class.

We also won the remaining two races in moderate to light winds, being first boat in, never once calling on our handicap. But the old timers still mention “that race” which was the making of the Thistle class because it removed from the minds of those who were there any doubt of whether the Thistle could go out and take it. Now lightweight planing centerboarders have demonstrated their abilities in convincing fashion in such events as the One-of-a-Kind series that we know what to expect, but at that time they were almost unknown.

Needless to say, I was kept busy after the regatta taking people sailing by the dozens. Everyone wanted to try out the Thistle. And that is why there were so many anxious Thistlers-to-be chomping at the bit long before we were able to commence production.