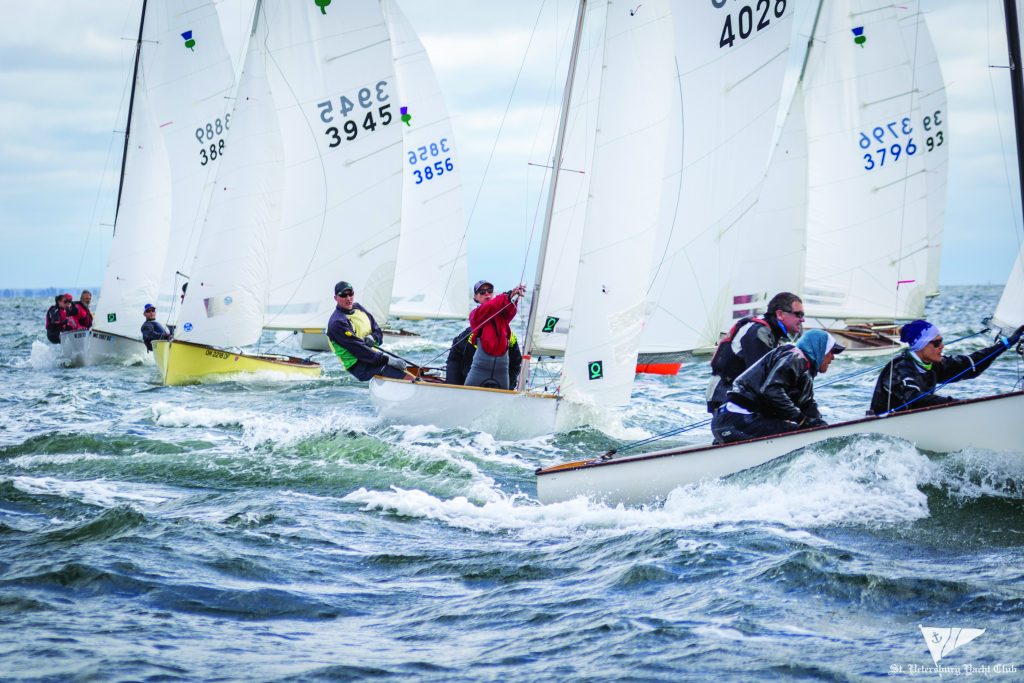 As we age, we’re supposed to slow down and be more leisurely. Well, somehow the 64th Annual Midwinters East at St. Pete didn’t get the word. Tampa Bay acted more like a Millennial overloaded on Red Bull rather than a Green Bench Senior Citizen. Eight full-hike races in plenty of breeze made for a challenging week. So much for St. Pete’s reputation as a light air venue! Thank goodness, the water wasn’t too cold for swimming… right, Tom Hubbell?

trek. There were even international crews from Sweden and Finland!

The competition was close and competitive with six different boats winning races. The PRO, Todd Fredysen, considered a second (ninth) race on the last day, but the fleet cried, “No mas.” There were even reports of some crews “kissing the ground” when they finally made it back to the Sailing Center.

There were some interesting oddities about the racing. The top five finishers only won half the races. All eight races were sailed after a postponement. There wasn’t one General Recall. This was the last major event at SPYC before the virus outbreak and the cancellation of all SPYC spring sailing events.

Mike Ingham with crew, Dan Fien and Marianne Schoke in #3969 claimed his third Midwinters East championship and Miami Sunshine Trophy. He also won the Ol’Thistlin’Tom as top finisher over the age of 50. Mike didn’t win a race, but his five 2nd’s and 29 points overall gave him a solid lead.

Last year’s champion, Matt Fisher, with crew Wayne Pignolet and Sarah Paisley in #3990 was the runner up with 37 points. Matt won two races and also claimed the new Old Salt Trophy for highest finisher over 60. The trophy was donated by the Glover family. Matt was the only top five competitor without a double-digit finish.

Jack Finefrock sailing #3945 had a couple rough early races, but his finishes improved as the breeze built. He tied for 3rd, but won on the tiebreaker with 59 points. His crew were Jesse Shedden and Carrie Patterson.

Brent Barbehenn #3998 had the other 59 points finishing 4th. He sailed with Brian Parker and Kate Erklaurer. Tiffany Parker was his forward crew early in the week. 5th Place with 71 points was Craig Koschalk #4028. Lauren O’Hara and Ryan Kyle were his crew. Craig finished strong, winning the last race. 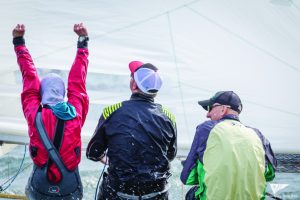 The winner of the six-boat B-Fleet was Bill Lawson #3678 with Sandy Westphal and Jonathan Phillips crewing. Finishing 21st overall, he also received the Mid-Fleet Award, a Homer Simpson plush doll – D’Oh! The requirement is to take Homer with you to any regattas and bring him back to the MWE. B-Fleet 2nd went to Kevin Tschantz #3464 with Ethan Anderson and Dustin Davis crewing. 3rd Place went to John Gilmour #4045 with Robert Daniel and Sally Rusk.

There was plenty of fun ashore to offset the hard work on the water. SPYC showed off its culinary creds with a seafood paella dinner the first night and ended with an upgraded banquet complete with bagpiper for the awards banquet. The welcome dinner featured an oldest tee shirt/hat contest that ended in a tie between Lloyd Kitchin & Warren Duckworth for the same 1975 Northcape Nationals shirt. There also was an off-site pub night and the Second Annual Intergalactic Thistle Shuffleboard Championship.

Next year’s MWE will be the 65th. Make plans to attend this memorable blowout.

Abbreviated results are below. View complete results on the Yacht Scoring website or download the PDF. For the race recap articles, see the June/July 2020 issue of the Bagpipe.