How to Avoid a Death Roll in a Thistle 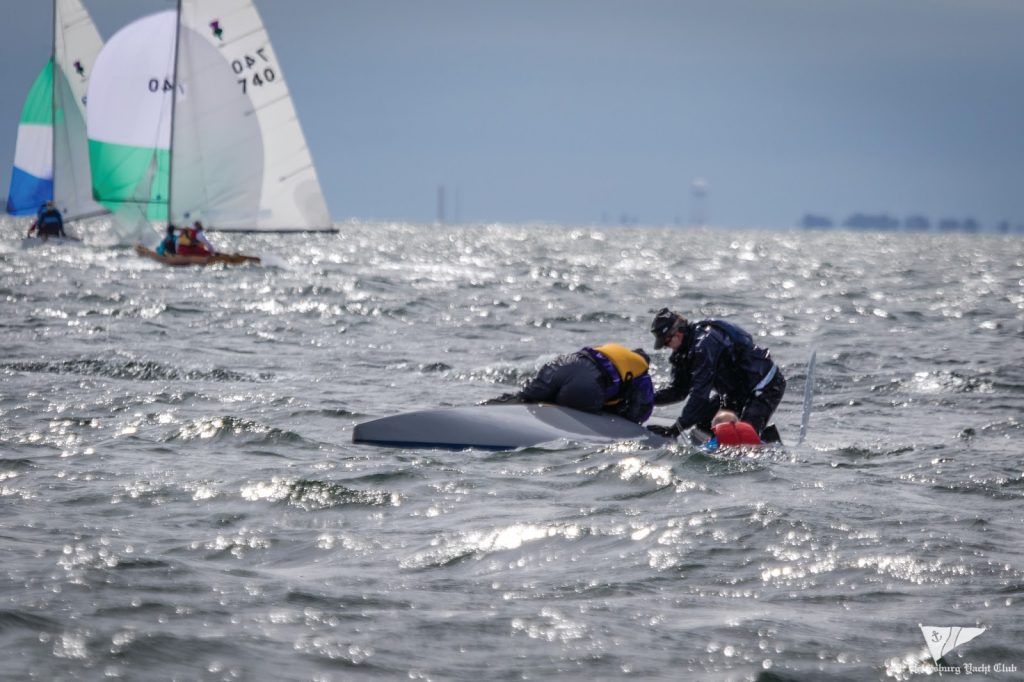 This question and resulting answers was a conversation Initiated by John Gilmour #3141 on the TCA list serve.

Q: How do you avoid a death roll in heavy air?

At the wonderful ACC Regatta this past weekend, we experienced a death roll in the third race. We had rounded the windward mark a minute or two earlier and were on a starboard tack in strong wind conditions. We were heading very low, and the board was more than half up. The wind shifted about 20° so that we were sailing by the lee, and then we capsized to windward. It happened so fast that we had practically no time to respond.

Thinking this through, it seems that we (perhaps obviously) should have been pointing higher, and that would have left us less vulnerable to the wind shift. Second, if the board had been all the way down, it would have both lowered our center of gravity and slowed our heeling to weather.

I’m curious about what we should have done differently.

A 1: Use crew work and steering will save a death roll.

Here are three items to think about that can help control this and 2 of them are crew work/communication vs. steering.

A 2: Tighten the boom vang to prevent a death roll.

Another tip I find helpful…..

The counter balance to the boat being unstable is the mainsail leech. As the spinnaker pulls the boat to windward, tightening the boom vang adds power to the leach of the mainsail and will balance the boat.

A 3: Stabilize the spinnaker to ward off a death roll (and other tips).

In addition to Ben’s and Paul’s excellent tips I have a couple other tips garnered from racing Thistles on San Francisco Bay for over 30 years: Never let your middle/spinnaker trimmer allow the leeward clew past the windward side of the forestay as the friction of leeward spinnaker clew against the forestay acts like another spinnaker pole helping to keep the spinnaker stabilized and slow/stop it from swinging/rolling to windward, plus it keeps the combined center of effort of the main and spinnaker to leeward or just over the centerboard rather than to windward which will cause a death roll.

If the boom vang is too loose then the center of effort of the main moves to windward which you should be able to quickly feel with the helm as the sails are starting to drive the bus rather than the rudder and the nut on the tiller steering the bus.

Centerboard all the way down as it helps to dampen the “soap dish effect” of the hull acting like a pendulum under the sails that occurs if the centerboard is up in any position.

Sail more often in moderate to heavy-air to really learn how to race/sail a Thistle in those conditions. Unfortunately more and more sailors, clubs and/or venues over the years have chosen not to race Thistles in more than 15-18 knots which is a shame as the Thistle is an absolute blast to race in the low to mid 20 knot range as long as you know what you’re doing.

A 4: Get help from the forward crew to steer clear of a death roll.

Great points by everybody so far! In my opinion, the forward is the most valuable in this situation. Even if they can’t predict header or lift in a puff like that, if they say that something will happen, it’s easy enough to sail the boat at a slightly more controlled angle, drop the board, vang on, and accelerate for a few seconds, then go back to normal sailing after the terror is over. I’d rather lose one boat by sailing inefficiently for a few seconds vs. losing every boat by being flipped over.

One thing I do in general is if the boat gets squirrelly downwind at all, drop the board first. I’m also not a particularly strong driver downwind, so I can’t really afford to look back for too long. Because of this, I’m always asking my forward leading questions just to have them paint a picture of what’s happening behind us.

A 5: Use a step-by-step approach to avoid a death roll.

There are a lot of good points here by some great heavy air sailors! I would add that the angle of the wind would dictate whether you would head up or down as a big puff hits. I think that Ben might have been thinking about the wind going forward as you accelerate. However, the original post mentions getting a 20° lift with the puff. In that case, you would need to be ready to steer up as some others mentioned. Getting the boat near a 150° angle (We actually have the little angle do-hickeys) as it accelerates in the increased wind seems to be the most stable point of sail. Once the crew has moved back to lift the bow up and the boat is up to speed with the new puff, then the skipper might attempt to work back down some depending on how stable you feel. If you remain lifted and feel it is safe to gybe, do it while the boat is planing and up to speed. Just try to keep the weight back so you do not stuff the bow. If the puff is too large (18-19 plus knots) or waves too big and you might stuff the bow, it might be wiser to stay on the 150° angle and wait it out for less wind to either work back down or gybe.

We do almost all of the same things as described above, but are a couple of tidbits on our technique that we have learned over the years and were just reinforced in April at the Southeast Championship in big breeze in Pensacola:

Step-by-step of who does what during the big puff:

So here would be the sequence in preparation for that puff/lift on our boat (many of these have already been mentioned above, but I am trying to help quantify the amount of each and show where we use the guy hook):

If it is really big:

A. Skipper steers up to 150° angle and tightens the vang a bit to make the top batten at least parallel to the boom if not a little tighter (depends on how big the puff is).

B. Verify the board is at least halfway down. We usually do not go much farther down than that, but have a little more on occasion.

C. Skipper asks the forward to put the spin sheet in the guy hook making sure it runs outside of the cleat (the guy is already in it on the weather side) and tells the middle to be ready to choke the chute if need be.

D. Middle eases the pole forward just a bit for the new angle.

E. All crew slide back a little more and prepare to stabilize however necessary as the puff hits. This stabilization is usually done by the skipper’s weight first as he/she gets the immediate feedback on what the helm is doing. It also usually does not take much weight adjustment at this point of sail, and if all crew move, you overcompensate.

F. Once in the puff, evaluate whether it is safe to gybe, or if we have to continue because it is not worth the risk. Remember, we just got hit with a 20° lift, and it is likely that we will be headed more toward the mark with a gybe. Getting on the favored gybe as soon as it is safe to gybe is a priority (but not over staying upright). When we do gybe, the new guy is already in the hook and the pole is much easier to hook on the new guy and get to the mast ring because the chute is more stable and controlled. Just make sure that the old guy is also run outside of the cleat. Perform an S-gybe with the boat unloaded (either planing or surfing), having the forward help get the main started across by grabbing the vang attachment at boom. Skipper also uses the mainsheet to start the gybe and may even over sheet it a little to begin with. The skipper should help call when to attempt the boom throw.

G. As the breeze starts to moderate, decide if we can get the old guy (now the sheet) out of the hook. The sooner we can do that, the more effective the middle can be pumping the sheet and guy on the waves. Get back to the deep/work the boat hard mode as soon as it is safe/prudent.

If the puff is not that big, we would use a little less vang, maybe not steer all the way up to 150°, and not use the guy hook for the sheet. Slide back, but not as much as in the BIG puff.

As I drove back from the regatta in Pensacola, I thought it might make sense to use my side-loading barber-haulers as the twings. I just need to make sure there isn’t anything preventing them from doubling as twings in the rules and do something to protect the rails where they would rub.