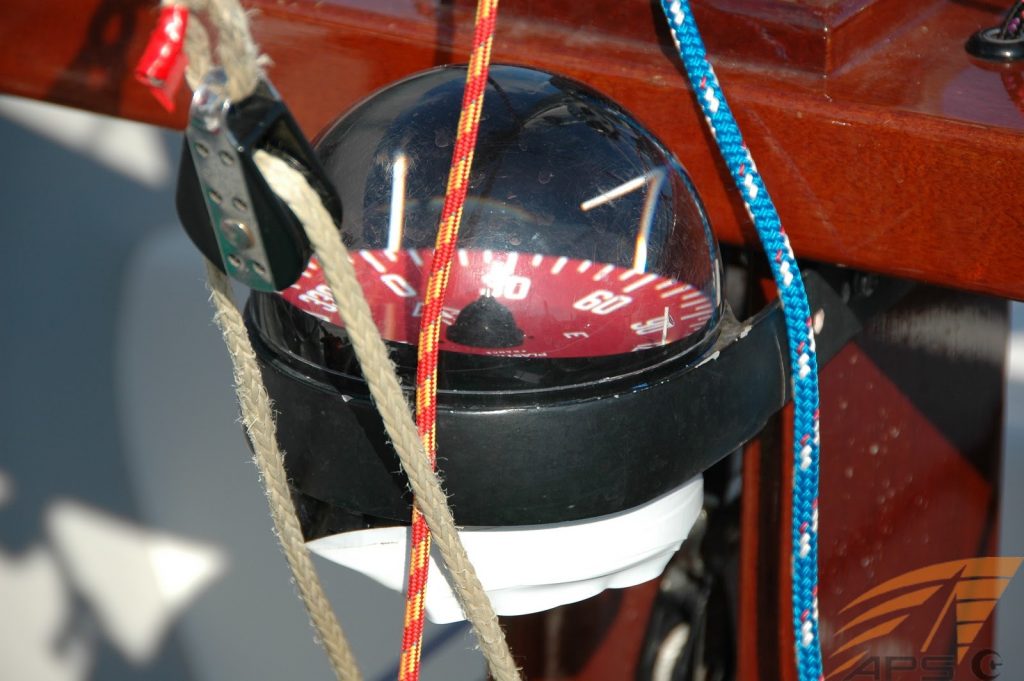 This article originally appeared in the 2019 June/July issue of the Bagpipe.

The Coach TCA participants at this year’s Midwinters East Championships were treated to a great session with Mike and Delia Ingham as they shared their routines for using the compass as they compete on their Thistle. I took these notes to share with our Bagpipe readers. Enjoy!

Mike and Delia began the session by saying that their team begins the compass conversations by asking, “What kind of day is today?” They may use the compass extensively or not use it at all depending on the answer to that question.

As they begin to craft a plan of attack Mike, Delia, and their crew set priorities. They decide if one side is radically favored – like having considerable current or a large geographic wind effect. The compass is less important those days. If the shifts are large and random, then it’s eyes out of the boat as the lifted tack is obvious. In that case, it’s best to watch the water for clues to what is happening instead of the compass. Based on their observations they set the plan for how much and what type of compass the team will need from Delia.

Days the compass is most valuable

Most days, keeping track of subtle wind direction changes is important. For that, the compass is invaluable. Days where the wind is shifting with a pattern (such as an oscillation), or even when there may be no discernible pattern, knowing if they are lifted or headed makes the compass an integral part of the team’s conversations. For example, if they expect a thermal, they look for a pattern. If there is a gradient breeze, it will be shifty with no expected pattern. If air is warmer than the water, the wind is likely to be steadier than if the water is warmer than the air (typical fall conditions up north).

But still be heads up!

Even though there is a time and a place for it, Delia and Mike don’t blindly follow the compass. The comparative heading of other teams will also be part of the conversation. If the compass says they are lifted, but others above are headed higher, it is likely a persistent shift, so it’s time to abandon the compass and play the persistent shift. Mike suggested you tack early in this situation and take some lumps early so you will not lose the whole fleet.

Mike and Delia next shared how Delia reads the compass and what information is shared. In an ideal situation, they head to the race venue an hour before the race starts. After checking in with the race committee, the team sails upwind.

Delia begins writing down the numbers in pencil on the seat tank every 3-5 minutes and noting trends on each tack. In particular, she is looking for a “high” and “low” setting with the ultimate goal of agreeing on a mean (average) compass heading for each tack. The simplest way to make your first guess is to split the difference between the high and the low. It’s not an exact science, so don’t overthink it – just make your best stab at it, then modify it from there based on more data and trends you see.

Once the races begin the conversation then shifts to what the current heading is compared to the mean, Delia shares the heading by saying that their heading is either “x degrees high,” “y degrees low,” or “neutral,” (the agreed-upon mean). In addition, she may share these numbers but then add information on other teams’ headings. For example, “We are 5° high, but the team ahead and to leeward is headed even higher than us.”

Fine-tuning the mean continues throughout the day as more time passes. For example, if Delia is saying they are in a righty 75% of the time, then she adjusts the median right on both tacks a few degrees. You know you have it right when right and left seems balanced 50/50. In cases of a persistent shift, the team may decide to shift the median number because Delia has been reading “15° high for the last 10 minutes”, or “We are 10° up, but the fleet above us is 10 more degrees up than we are.”

Mike summarized by stating these steps for compass conversations.